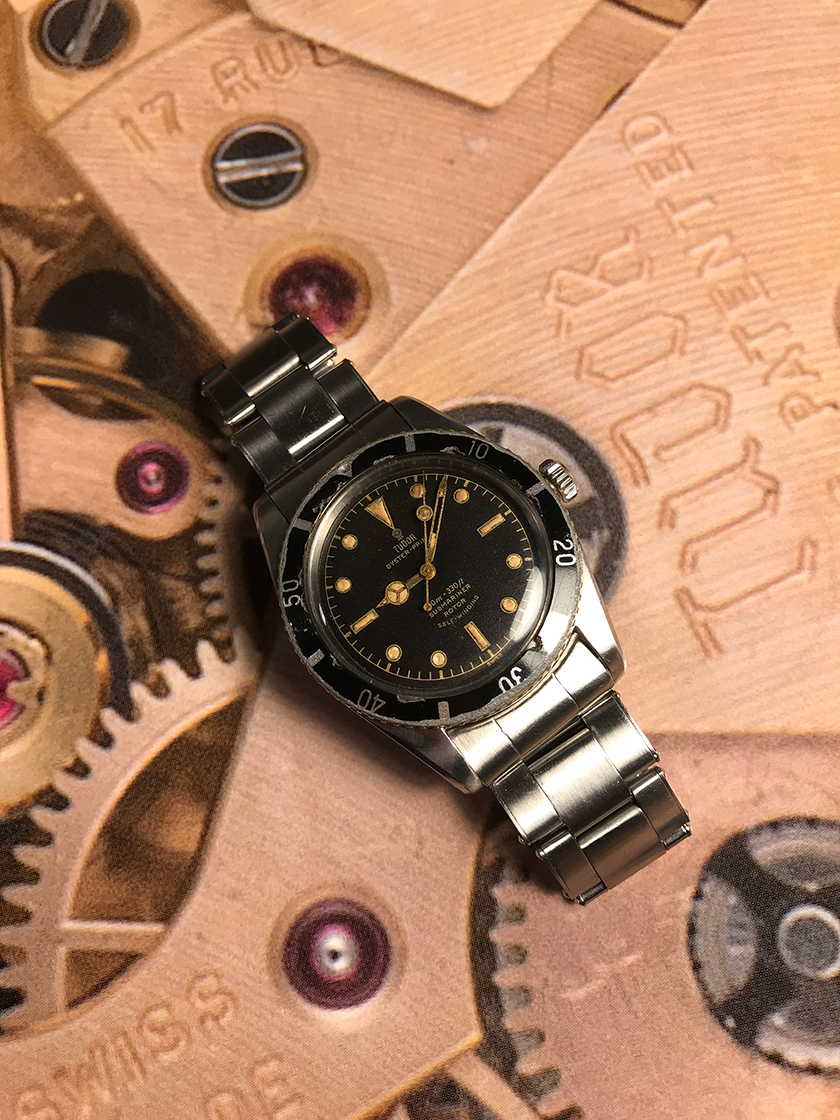 The history of scuba diving

By the early 50's, the eyes of the world watched in amazement at movie theatres, magazines and advertisements the undersea wonders hidden to humankind until then. Even though scuba diving dates back to a time long before these images were brought to the masses, it began to attract enthusiasts and military professionals that soon became notorious for their deeds in undersea exploration. At the same time  of this underwater euphoria, equipment manufacturers kicked off an intense race to develop the newest equipment suitable also for professional and recreational use. As it was to be expected, watchmakers could not miss the opportunity to also join in by developing water-resistant, reliable and easy to handle precision tools for professionals and enthusiasts with basic diving skills. 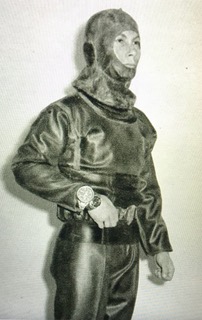 Considered in its early days as an activity reserved for the elite, its media impact (mainly in the US by popular tv shows) attracted a rather modest public. This, created the necessity for equipment at affordable prices for enthusiasts with a tight budget to invest in.

Despite the tight budget of a rapidly-growing market, many watchmaking brands engaged in a fierce competition to grab a slice of the pie. Besides of the real outcome, this battle ended up by providing the world of highly revered icons in diving watches and yet, the debate of "who's the first" and "the best at" remains open in every discussion up to this day.

Back to our subject. It was exactly by this time (scuba diving "boom") that Tudor presents in 1954 their first Tudor Oyster Prince Submariner with the reference 7922. This great entrance to the professional watch industry is currently one of the brand's milestones that would also set the grounds for one of their longest produced and most popular diving model.

But before going any further, a little bit of history...

Tudor is registered as a brand for the first time in 1926 by Swiss company "Veuve de Philippe Hüthe" on behalf of Hans Wilsdorf, Rolex founder. But it wasn't until 1946 that Wilsdorf founded Montres Tudor SA with the objective of producing Rolex-like quality watches at affordable prices. [1]

In 1952 Tudor launches the Prince model in an Oyster (Rolex) case and automatic movement. Named Tudor Oyster Prince, this production opened the way in the manufacture of tool-watches for professional and, mainly, military use. Two years later, the brand would venture into the diving watch industry. 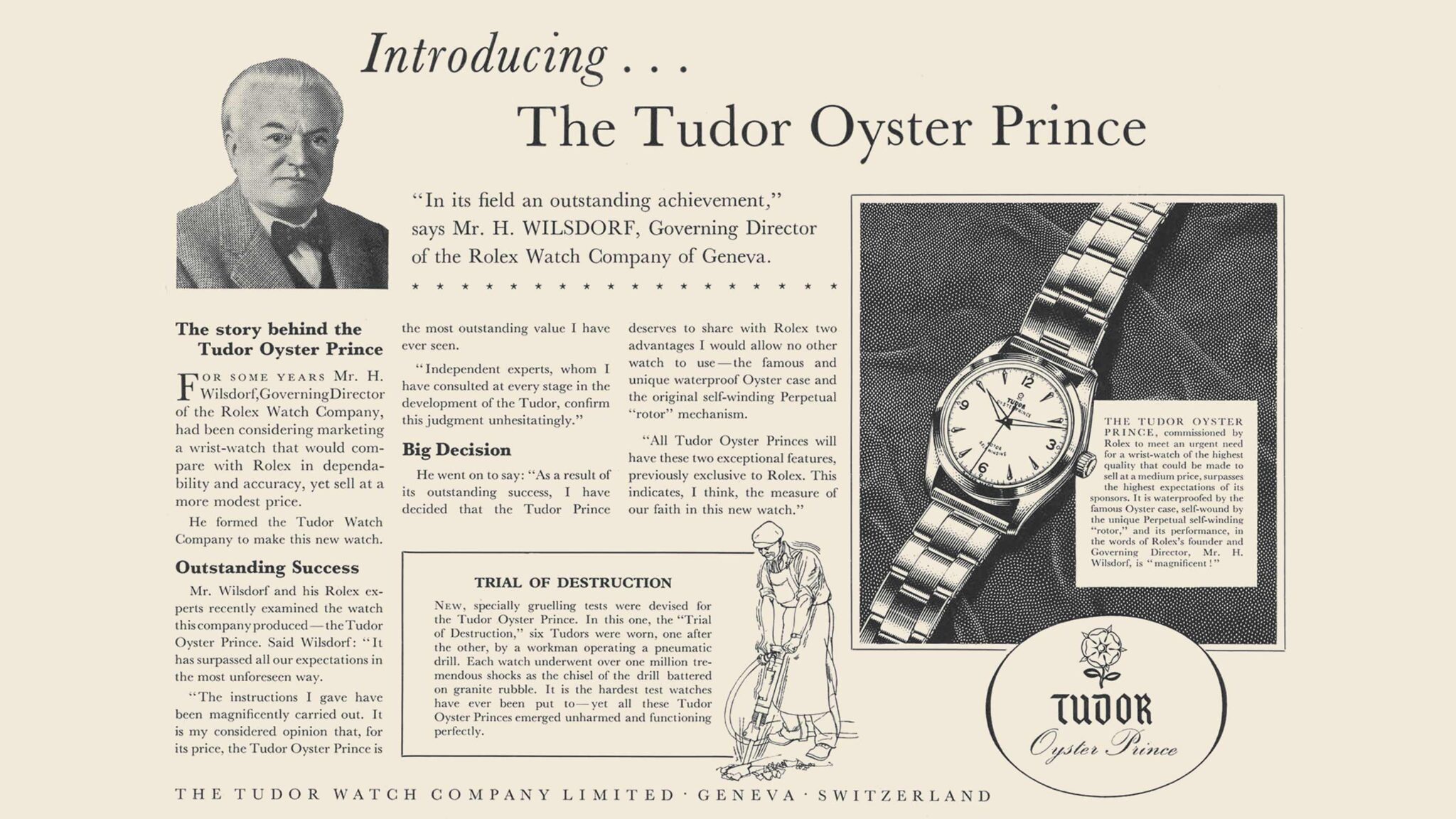 "...It was a self-winding watch unique in the brand’s collection. Its features corresponded to its function as a divers’ watch: a case with a screw-down back and a crown whose waterproofness was guaranteed to a depth of 100 metres, large hour markers and hands with luminous material for easy reading in deep water, as well as a bidirectional rotatable bezel graduated in 5-minute intervals to precisely measure dive time and allow for the adjustment of the decompression stages. Its black lacquered dial, subtly domed, was designed to optimise contrast with the indications it bears – the gilt inscriptions “OYSTER PRINCE” at noon under the brand logo, and “100 m = 330 ft”, “SUBMARINER”, “ROTOR”, “SELF-WINDING” on four lines at 6 o’clock. There is also a reminder of its guaranteed waterproofness at 6 o’clock, in metres and in feet. Its Tropic-type Plexiglas crystal was dome-shaped for better water pressure resistance. Its movement was the self-winding calibre 390, developed on a Fleurier movement-blank with a frequency of 18,000 beats per hour. Finally, its 5 mm-diameter screw-down crown and its Oyster-type bracelet, reference 6636 with riveted links, were signed with the Rolex logo." (Divers' watches: From 1954 to 1968, Official Tudor Watch Website, https://www.tudorwatch.com/en/inside-tudor/history/tudor-history-submariners-1954-to-1968).

This beautiful example, from which there are very scarce and rare examples available in the world, belongs to the first series of the Tudor Submariner Ref. 7922 circa 1954. In an extraordinary good condition and smooth functioning, it includes all of its main original elements (bezel, lunette, dial, crystal and crown) which is unusual in pieces this antique. This is why we underscore its uniqueness, as similar examples often come with service replacement elements. The sharp lines in the case are intact and just a few signs of a respectful use inherent to professional diving. It is presented unpolished. In addition to these important characteristics, the main features on its beautifully aged dial with a dark-brown patina, are as exceptional as the rest of it:


As one outstanding rarity, we can observe the English Tudor rose logo touching the noon marker and under the inscription OYSTER-PRINCE in one line. The registers at the 6 o'clock position in four lines with the curved SELF-WINDING inscription. The markers filled in Radium slightly preserve luminescence and the central hands shows some traces of this material.


Its heartbeat is powered by a first generation 390 calibre that keeps this beauty running with exceptional precision.

Acquired from family inheritance from its single owner, this watch is a real treasure for the most exquisite collection.

For more details or to arrange a personal presentation of this timepiece, please contact our vintage watch expert.