The Movado Chronogrpah That Made History: 95M FB 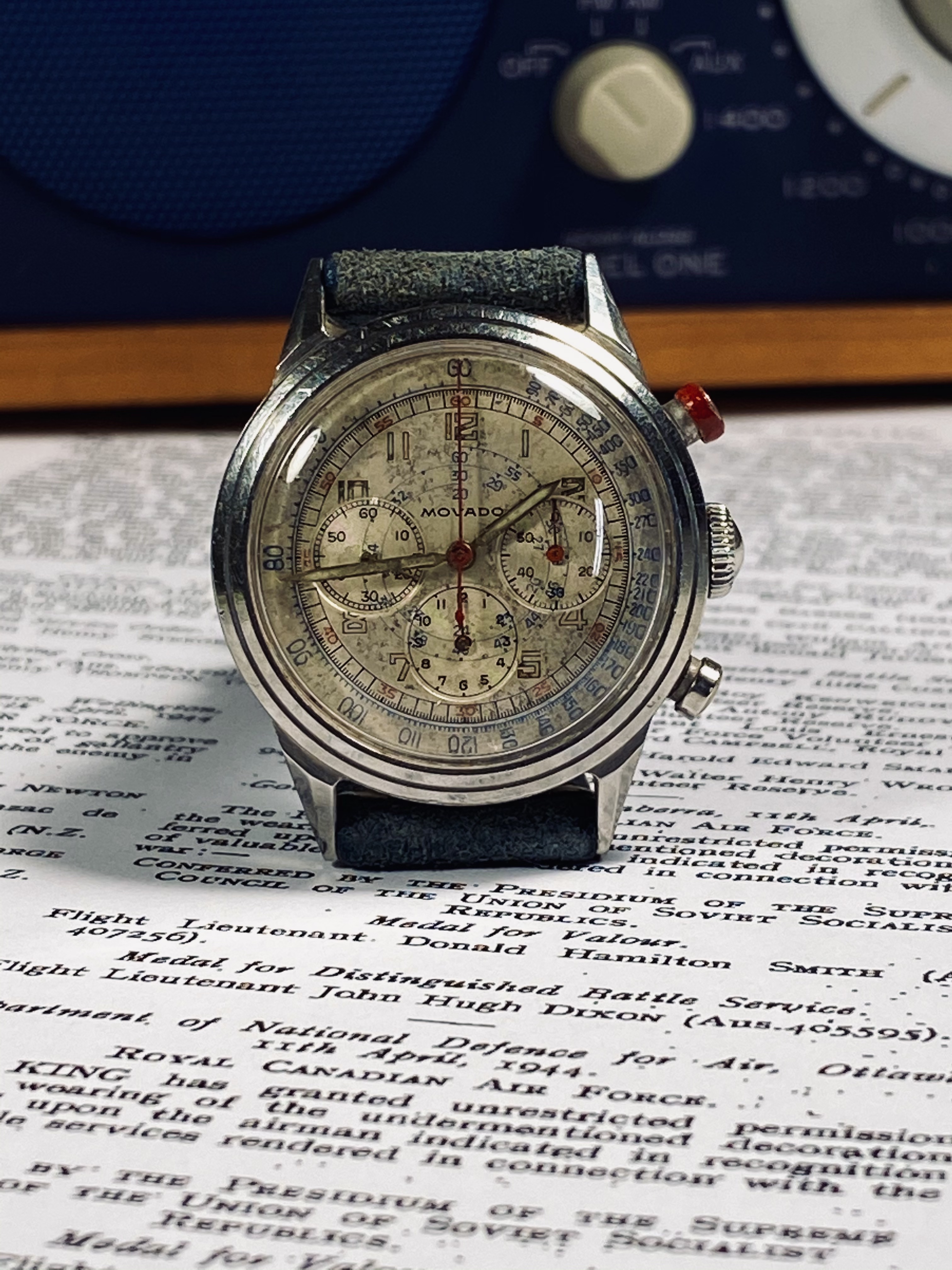 Movado is one of the watchmakers with the longest tradition since its foundation in 1881 by young visionary Achille Ditesheim. At the young age of 19 and with the help of a small team of skilled watchmakers, Ditesheim founds the LAI Ditescheim & Freres SA in La Chaux-de-Fonds in Switzerland. Alluding its innovative spirit and with an international projection, in 1905 changes its name to Movado ("always in motion" in Esperanto). Faithfull to its philosophy, Movado is a company in constant evolution in the fine watchmaking industry. [1]

With a high degree of perfectionism in high-quality watchmaking at the beginning of the XX Century, the brand managed to position itself among renowned brands from that time. However, the collaborations Movado held for its manufacture around this time, are the responsible of boosting its popularity and appeal to collectors.

The Movado Chronograph Cronacvatic Ref. 19038 belongs to the first generation (1946-1959 aprox.) of the brand's chronographs that incorporate the iconic 95M calibre manufactured by Fréderic Piguet. While its predecessor, the 90M calibre, already provided an important innovation as a modular chronograph, the 95M included a 60-minute counter and a very special feature: the inverted position of the chronograph pushers where the top is for the zero reset and the bottom for the start/stop function. This ingenious detail allowed ease of handling, especially for professional use where the watch had to be worn on the right wrist.
This collaboration wasn't the only of great relevance for this production. The other name that added its stamp on the inner back case of this extraordinary piece is François Borgel (FB). This innovator and clever Swiss case manufacturer who is credited for creating in 1880 the first waterproof screw down case, engraved his name in the haute horlogerie history for his iconic Patek Phillipe 1463 case. The collaboration between FB and Movado (around 1935) begun with the production of the 90M cases and later on for the 95M. The main features on these cases are the faceted lugs that provide an audacious and sporty look at the time and the screw down decagonal case back.
Produced and tested as a professional tool in aviation, Movado's chronographs can be found in special editions for military use. Such is the case of the units produced for the Royal Norwegian Air Force. In this special production, some subtle details can be observed on the dial and hands as well as a case back with the armorial bearing of the RNAF.

Important: As there are very few similar pieces on the market and little information available in public records or from the brand itself, the presented information might contain inaccuracies or be subject to further research. The names and circumstances here below are the result of a research based on several internet official sources of public access (reffered to at the end) and correspond to personal conclusions.

This Movado Chronograph Cronacvatic 19038, besides of an extraordinary aged patina, features some very unique characteristics. While professional wristwatches used for military forces is widely known, the collaboration with many armed forces lead watchmakers to perform a series of technical modifications to meet the specifications in terms of functionality. In the case of Movado, there was a production of the 95M Sub Sea Chronograph for the Royal Norwegian Air Force circa 1950. The result of such special productions is that variants can be found in one same reference that differ from the series produced for sale to the general public.

On this very rare chronograph, we can observe the following interesting variations (although we cannot assure such variations were performed by the brand as there are no existing records or evidence of similar pieces):

- The most remarkable at a glance is the red lacquering on the reset pusher that provides an enhanced visibility on this important element and also gives a military retro look.

- The minute marker slightly differs from other dials from this same reference. It's delineated by two rings that define the marker from the exterior tele metric scale and dial and also features numbers in red.

-**The case back is engraved with the name "Donald Hamilton". According public registers available on the internet, this name coincides with Lieutenant Donald Hamilton Smith, pilot with the Royal Australian Air Force that served for the UK armed air force in WWII until 1944. On 1945 he was discharged from service with honours. [2]